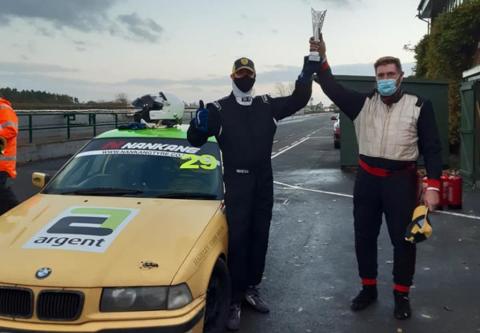 Competing at the Croft racing circuit near Newcastle, hopes were high that regular drivers Phil Adcock and Andy Waters might finish well, having previously achieved a 3rd place earlier in the year. However, they ended up being dissapointed to only qualify 5th, hampered by a tyre gamble that turned out to be the wrong selection in changeable weather conditions.

When the race did start on a very wet track, a ligthening fast start by Phil allowed the team to gain 3 positions by the end of the first lap before a safety car intervened.

Knowing that the Argent car was likely to get significantly faster as the fuel load reduced, Phil stayed on the tail of the 1st place car after the restart, never allowing more than a second gap to emerge before pitstops for driver changes were made.

Experienced driver Andy Waters left the pits immediately behind the leader and set about putting intense pressure from his very first lap.

This pressure paid off with the leader losing track position on a 100mph+ wet corner, allowing Andy to bravely move into the lead.

Despite continued attempts from behind him, Andy drove a defensive remainder of the race to fend off all attacks, crossing the finishing line less than a second ahead of the chasing pack.

The victory was celebrated enthusiastically be the Argent Team in the pit lane as the BRSCC club officials presenting the trophy with Covid protocols preventing the normal spraying of champagne on the podium.